Out Now! The Little Book of Big Visions 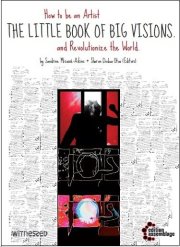 The Little Book of Big Visions:
How to be an Artist and Revolutionize the World


Black artists in Germany find themselves – necessarily – in a position in which subversiveness and resistance – implicit and explicit – become essential strategies to be used in their work if they wish to survive in this predominantly white context. However, after resistance is no longer necessary, what could be the vision then? And what is the central role of the artist in shaping or creating these visions?

“The Little Book of Big Visions: How to be an Artist and Revolutionize the World” is aimed primarily at Black cultural producers living and working in Germany as well as those who reside in English-speaking contexts throughout Europe, UK, US and beyond. However, this book is also aimed at everyone who has an interest in ensuring that the contemporary art scene in Germany finally begins to be truly reflective of its actual and future population.

"Be a part of it!"
Witnessed is an English language book series, launched October 2012, that documents experiences of being Black in Germany and is published by edition assemblage.
It's success has been primarily due to the countless supporters who have donated to crowdfunding campaigns, have worked (written, designed, filmed, directed or performed) on a voluntary basis or have raised money to support the production of exhibitions or staged readings.

You too can support Witnessed by:
* sending us a submission
* buying (and recommending!) our publications
* hiring the exhibition "Daima"