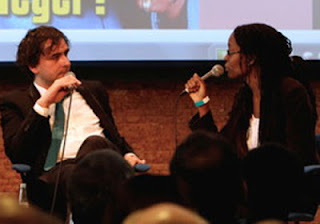 On Saturday, 20th April I took part in a panel discussion on language, satire and antidiscrimination.* In preparation for the panel, and in the conversations I have had about it since, I began to develop some thoughts about political identity, positioning and the nature of ally work.
These thoughts are relevant to Witnessed project and my role as Series Editor, therefore I would like to share them here.

I believe I was originally invited to participate on the panel because I am a Black woman writer and activist. The debate about the use of the German N-word is still causing emotions to run high in the white mainstream media. My role on the panel should have been to attempt to explain why exactly so many thousands of Black people who live in Germany welcome the decision by Otfried Preussler and Thienemann Verlag to remove the word from the next edition of the much loved children's classic "Die Kleine Hexe" (The Little Witch). Although I had originally turned down the offer, after sleeping on it and talking it over with a close friend, I decided participating on the panel was something I simply had to do.

Despite the fact that a fundamental part of my experience in Germany is tempered by racism and sexism, I of course do also enjoy certain privileges. First and foremost: I am an adult. My voice carries infinitely more weight, than those of my children. And yet it is my children who are repeatedly confronted with the N-word in their educational materials, on the playground and in classroom discourse. Unfortunately in Germany 2013 there are still teaching staff at schools who believe the N-word is a neutral word and that Black children are simply sensitive and immature if they object to it being used in a context which does not clearly problematise it. My decision to participate in the public event and discuss the removal of racist vocabulary from children's literature was at least in part to use my privilege to support the many children in Germany who, like my children, suffer in silence or suffer for speaking out.

The subject of the panel was not only to focus on racist vocabularly however, but also on gender-appropriate language. I am also a cis-gendered, straight woman. In a society which constantly affirms - at least in this aspect of my identity - that I am a "normal" person, those who - in this way - are not like me objectively have a harder time. It was therefore in the end not difficult for me to decide that I needed to sit on the panel: I do have privilege, and I want to learn to be a good ally.

I am pleased I participated in the panel. In the limited time I had, I was able to express my views clearly at the event and later I wrote an article for the taz (in German). I have received many positive comments, messages and emails from people who have a new understanding of the issues.

Activism - I have learnt - is a combination of fighting against, fighting for, but also fighting alongside. I cannot speak for all Black people - I will not even try. Instead I want to make explicit one of my wishes for the Witnessed Series: I want to continue to use those resources which I do have - my networks, my skills, my projects and my activism -  to speak and enable others to do so too, for...

“...when we speak we are afraid
our words will not be heard
nor welcomed
but when we are silent
we are still afraid
So it is better to speak
remembering
we were never meant to survive”
― Audre Lorde, The Black Unicorn: Poems

*Unfortunately, I left the stage before the official end of the discussion, as did some 30 members of the audience. The circumstances are discussed in detail elsewhere (in German).
Posted by Sharon Dodua Otoo at 01:35