Berlin | World Premiere of "The Most Unsatisfied Town" by Amy Evans 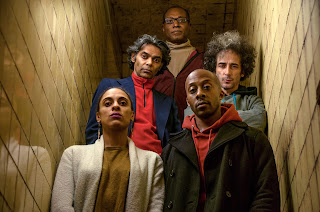 The world premiere of "The Most Unsatisfied Town" on Thursday, April 7th has already sold out!

Written by Witnessed author, Amy Evans, and directed by Daniel Brunet of English Theatre Berlin | International Performing Arts Centre, this play will run for a total of 14 performances throughout April 2016, including one school matinee performance on Wednesday, April 13th.This brilliant and important play is based on the true story of Oury Jalloh, who was killed in Dessau police custody on January 7, 2005, and the activists of the Initiative in Remembrance of Oury Jalloh, who spurred an international movement to bring his killers to justice.

"Since he arrived in Germany, Laurence has tried to do everything by the rules. He applied for asylum, waited patiently for his papers and found the kind of job no national would ever care to do. He is friendly to his neighbors, even the ones who tease his children in school, and cooperates with the police when they ask for his help.

He's found the formula for survival, or so he things, until one day his friend Rahim mysteriously disappears. When the body turns up charred beyond recognition, Laurence is thrust to the fore of a civil rights movement and is forced to take a closer look at the town he was so ready to call home."