The Refugee Protest in Germany - A Silence of International Proportions

Dear editors and journalists of the so-called quality press:

I see what you are doing.

Within the last 48 hours, the recent wave of refugee protests in Germany has escalated. As I write over 900 police officers, some in full riot gear, are standing outside the occupied school in the Kreuzberg district of Berlin. Inside the school between 40-80 refugees and fellow-activists have refused to leave until their demands are met. Some have climbed onto the roof of the school and are threatening to jump if the police should try to forcibly evict them. Eye-witnesses say the building smells heavily of petrol. The politicians responsible for this situation are taking big risks on the backs of people who quite literally have nothing to lose. This is a scandal and deserves to have international attention.

The eyes of the world should be on us here in Berlin. And yet there is a massive silence, which you are part of. I am calling you out on it. 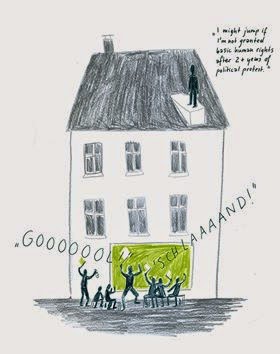 
Among the most powerless, disenfranchised, stigmatised and criminalised groups of people in Europe are refugees. They are confronted with structural and institutional discrimination and have very little access to legal recourse in the frequent eventuality that they become victim of direct discrimination, criminal acts and violent attacks. Even access to basic health and social care is severely restricted. From the way most refugees in Europe are treated you might get the impression that they themselves are guilty of some heinious crime. General public opinion suggests they deserve everything they get (or if not, "we" are too generous to "them"). The press has a major responsibility in the public image of refugees. For the most part, I observe that the press has failed them miserably to provide impartial information .

Specifically in the German context, the recent history of the self-organisation of refugees can be traced back to the foundation of groups like THE VOICE Refugee Forum, Karawane für die Rechte von Flüchtlingen und MigrantInnen in Deutschland, Refugees Emancipation and Women in Exile (to name just a few). In 2000, the very first International Refugee Congress took place in Jena. For some individuals, merely attending the congress was a criminal act: according to the German "Residenzpflicht" (residence requirement), those seeking asylum are not allowed to leave their local area without special written permission. Human rights activist and refugee Sunny Omwenyeke (who was a key organiser of the congress but had not received permission to travel to Jena) decided to launch a legal campaign against the "Residenzpflicht" and appealed his verdict all the way to the European Court of Human Rights. He based his argument on Protocoll 4, Article 2 of the Convention for the Protection of Human Rights:


Everyone lawfully within the territory of a State shall, within that territory, have the right to liberty of movement and freedom to choose his residence.

The campaign was unsuccessful. In November 2007 it was ruled that Omwenyeke had not been lawfully in the territory of the State because he was breaking the residency requirement. Further: the right to liberty of movement within a State is only granted to those who are lawfully within the State. In the other words: the right to freedom of movement for refugees in Germany is limited to the areas where the German state says they are legally allowed to move around in. A tautological masterpiece of legal ruling.

The Refugee Protest March from Würzburg (south Germany) to Berlin in 2012 marked the beginning of the recent wave of high profile refugee protests in Germany. Among the demands: the abolition of the residency requirement, an end to restrictions for access to the labour market and education, the end to refugee encampments (often poor quality and remotely located) and no more deportations. The camp at Oranienplatz became the symbolic centre, welcomed by supporters and tolerated by the local government. Some of the non-citizens (including women and children) moved into an unused school building in Ohlauer Strasse at the end of 2012. But in November 2013, the situation in the school was still catastrophic and not fit for human inhabitation. During an argument over the one shower on the premises (supposed to meet the needs of 200 people) one man was fatally stabbed. In April 2014 (due in no small part to the political manipulation of the divisions within the refugee movement) the camp at Oranienplatz was violently destroyed. It was billed in the local press as a successful end to the protest - too bad therefore, that the protest actually continued.  One Sudanese refugee-activist, Napuli Paul Langa, climbed up a tree and remained there for five days in order to ensure that at least an information point and tent would remain on Oranienplatz. For close to two weeks a group of men on the other side of the road, including Patras Bwansi of Uganda and Turgay Ulu from Turkey, set up a 24 hour picket and went on hunger strike. Apart from the very heavy police presence at Oranienplatz, very few German citizens who are not direct supporters have interacted with the refugees there. All the more shocking to find out that the one chance for international attention to be brought to the place was wasted on a feature on fashion by the NY Times  broadcast/published in May 2014. I am assuming it was shot well before the refugee protest march to Berlin, as the area is prominently shown and the refugees and their protest camp are conspicuously absent. Otherwise it would have required extremely careful filming and editing (if not deliberately moving of the protest so as not to ruin the film. I think no one could be that cynical).

This month another Freedom March of refugees and supporters arrived in Brussels. The protesters (many from Oranienplatz or residents of the school) were violently evicted from the German embassy on June 20th - World Refugee Day -  and 20 people were arrested (7 of these will most likely be deported). Solidarity statements and protests have been held in Hamburg, Magdeburg and Istanbul.

Where are your articles?

None of what I have written above, it seems, has registered with the so-called quality press internationally. While it would be hard to believe that none of you knew and I would not like to believe that none of you cared it is difficult not to come to the conclusion that this is a deliberate act of omission on your part - I can only speculate about the reasons. Whatever has led to this silence: I am disgusted.

As I write, the situation at the school has escalated to such an extent that several refugees have threatened to jump off the roof if the police try to force them to leave. I don't want to imagine what could happen next. Journalists based in Berlin have also been refused access to the school, to the refugees or to their supporters, therefore this is also a freedom of press issue. Whatever your stance is on the position of refugees, I believe you have an obligation to provide information to your readers and viewers. Act professionally, act politically and act morally.

This is not the time to be quiet.

Witnessed is an English language book series, launched October 2012, that documents experiences of being Black in Germany and is published by edition assemblage.
It's success has been primarily due to the countless supporters who have donated to crowdfunding campaigns, have worked (written, designed, filmed, directed or performed) on a voluntary basis or have raised money to support the production of exhibitions or staged readings.

You too can support Witnessed by:
* sending us a submission
* buying (and recommending!) our publications
* hiring the exhibition "Daima"